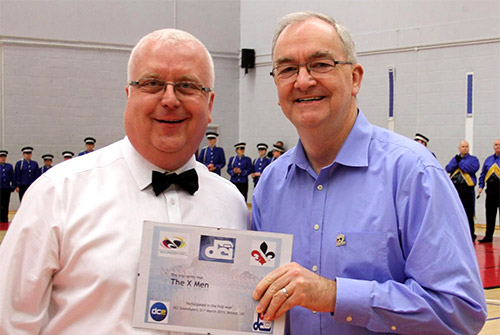 Drum Corps International and Drum Corps Europe have announced that Andy Hewlett has been appointed as the European coordinator for SoundSport. Andy organised the first UK SoundSport show in Bristol in March.

After the Bristol show, representatives from Drum Corps International and European organizations talked about developing the SoundSport activity on this side of the Atlantic. Shows across Europe are now in the pipeline for later this year and the coordination will be in the hands of Andy, who had previously been a DCE board member from 2005 until 2011.

“We’re extremely happy that Andy has accepted the position of European coordinator for SoundSport events”, said DCE chairman Marcel Matthijsse. “We know from his time on the DCE board how dedicated Andy is to getting more people into the marching music activity. That is exactly what we need if we want the marching music activity in Europe to grow and SoundSport can play an important part in helping us achieve that.”

Andy said “I’m delighted to have been given this position and I’ll work as hard as I can to promote SoundSport across Europe. My job will be to liaise with DCI, DCE and the National Organizations, as well as potential show sponsors and the SoundSport teams to develop this exciting new aspect of the activity.”

SoundSport will engage not just the active marching ensembles in the Europe, but will also provide new performance opportunities to ensembles that don’t currently have an outlet from which to showcase the talents of their performers. Information on DCE can be found at www.drumcorpseurope.org.