Drum Corps International’s SoundSport and Drumline Battle performance platforms shined on a brand-new stage Saturday, August 13, as hundreds of musicians and performers showcased their talents in the shadow of Indianapolis’ Lucas Oil Stadium.

Positioned at the stadium’s “Lot B” — a location just across South Street from the 65,000-seat venue that often serves as a popular organized tailgate spot for Indianapolis Colts football games — 2022’s SoundSport International Music & Food Festival thrived in a block party-like atmosphere.

The event, in total, featured more than a dozen performances on the any-age, any-instrumentation SoundSport stage, all helping kick off the triumphant final day of DCI’s 50th Anniversary Summer Tour in exciting fashion.

“What better place to be than literally looking right over at the biggest stage in marching arts?” Calgary Stampede Showband color guard member Brenden Lengsfeld said of the event’s new location. “What better place to have an event like this? These groups get to shine just as much, right by this incredible, iconic stadium.”

Lengsfeld and the Calgary Stampede represented Canada in the festival, as part of both the event’s SoundSport and DrumLine Battle portions. 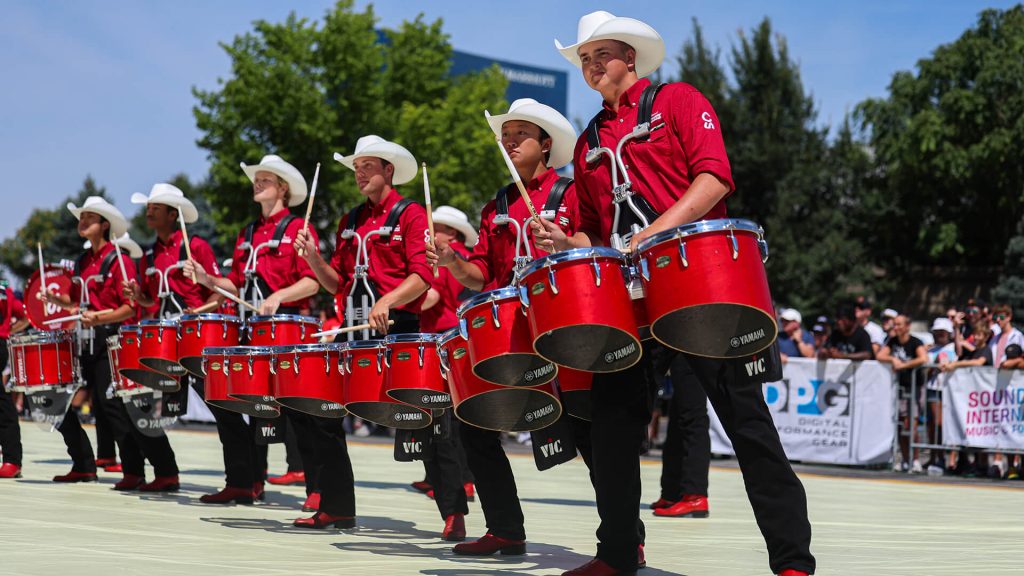 2022 marked the Alberta-based ensemble’s second time taking part in the SoundSport festival. According to Lengsfeld, the platform’s accessible nature provides an incredible opportunity for groups like the Calgary Stampede Showband, as well as smaller ensembles to have their chance at shining in the “big-stage” performance spotlight.

“SoundSport I think is one of the most exciting events here, because you really get to see what’s in the world of marching band outside of just what happens in Lucas Oil Stadium,” Lengsfeld said. “It shows so much more of those groups that are up and coming and maybe don’t have all of the resources of all of these big-name drum corps that we know and love. Getting to see so many diverse shows, all on one floor, is really incredible.”

As part of Saturday’s Festival, a total of 10 battery percussion ensembles took part in DCI’s bracket-style DrumLine Battle competition, The high-energy performance format pits drum lines against one another head-to-head and face-to-face, and emphasizes entertainment value and engagement as well as performance quality. 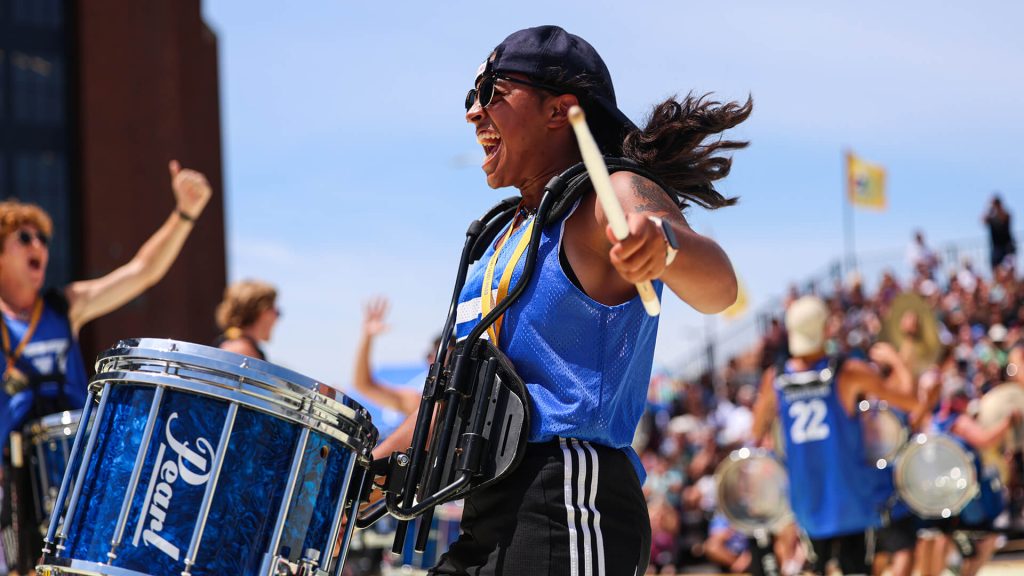 7th Regiment, one of several participants out of DCI’s Open Class division, won the Indianapolis DrumLine Battle competition for the fourth time since its genesis in 2013.

“This is so much fun,” 7th Regiment snare drummer Alexander Goins said. “I get to do this with all of my friends, and after two or three summers’ worth of work, it just comes together, it’s so fun.”

According to Goins, DrumLine Battle is a staple of the Connecticut corps’ percussion experience; the members, he said, feed off of its energetic nature.

“I think it’s just the hype,” he added. “We’ve always had a fun vibe here; whenever we get together, we’re always cracking jokes, but we’re also serious. Once we come (to DrumLine Battle), we get to let it all loose, and it’s just us out there on the floor.”

Ultimately, the latest edition of the SoundSport International Music & Food Festival, in its new location after a three-year hiatus, achieved its ultimate goal of creating memorable performance opportunities for a wide array of ensembles, while serving as a lively start to DCI’s “Finals Day” atmosphere.

“There was so much love for all of the groups, regardless of what the show was, where they’re from,” Lengsfeld said. “All of those fans, right there cheering you on, there’s no more fun energy than that.”