Indoor Music Games and SoundSport Get Underway in Dublin

The first in the European series of the Indoor Music Games and SoundSport took place in Alexandra College, Dublin on Saturday February 27th. The Irish Winterguard Championships took place on the same day.

An opening ceremony took place with Irish Marching Bands Association (IMBA) chairperson Oisin Molloy welcoming everyone and reading a message from DCI Executive Director Daniel Acheson who had sent a note to the participants and organizers. Drum Corps Europe’s IMG and SoundSport coordinator Andy Hewlett officially opened the games along with two of the youngest performing members on the day. 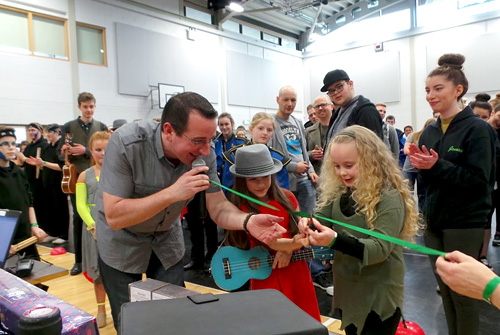 Cutting of the ribbon at the opening ceremony. (Photo: Kevin Morgan)

There were eleven units in total taking part over the three competitions. The SoundSport category brought fantastic variety to the day. Celtic Crusaders Drumline opened with a Daft Punk themed performance, followed by Sheilaghs Ukelele School band and The Flukey Ukes who performed for the first time at an IMBA event. Tallaght Youth Band performed an indoor marching routine, while Knights Academy Brass performed a more loose big band style show, including Jessie J’s “Bang Bang” which received a great reception from the audience at the packed sports and theatre facility in Alexandra College.

The IMBA council members also surprised the audience with a performance of Abba music. In their introduction it was noted that the performance was to mark the ethos of SoundSport and its open nature which allows for all skill levels and ensemble types.