The first Indoor Music Games/SoundSport event to be held in the Royal Forest of Dean proved a big success with participants and fans alike, when this new series of shows rolled into Lydney, Gloucestershire. The Forest, which is a rural area on England’s border with Wales, has long been the home of many successful Brass Band contests. But this was something new and different.

Fans arrived early to be sure of a good seat in the Forest Oak Arena, a new venue that proved a comfortable and welcoming setting for this type of event. With camping available on site, some people made a weekend of it in this popular tourist destination. 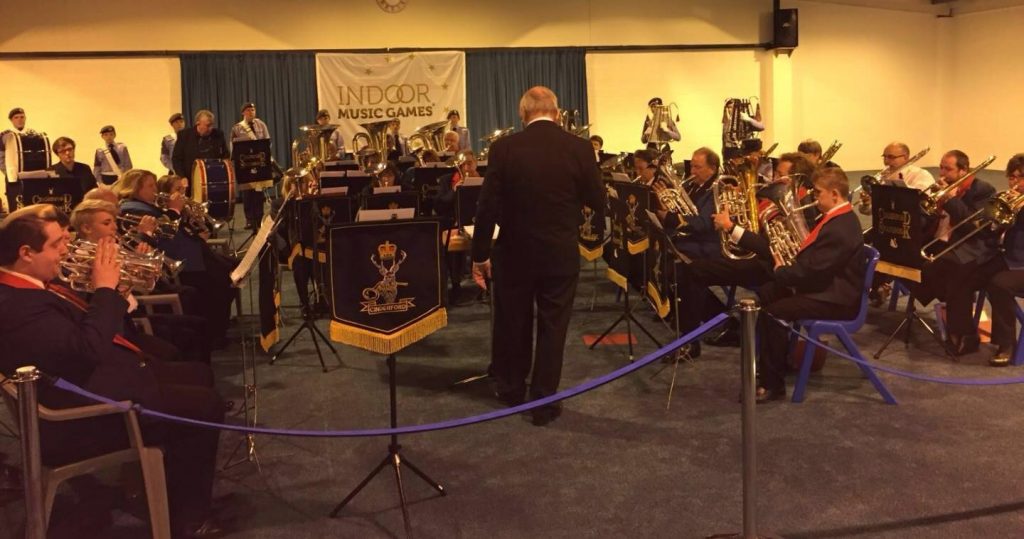 The show opened in ceremonial style with a fanfare (which would have been very recognizable to Blue Barons fans) that was well performed by hosts Cinderford Academy. Paul Morgan then gave an explanation to the audience of what the Indoor Music Games series is all about and how the SoundSport scoring system works.

The contest got underway with the first ever competitive performance by 614 Lydney ATC Drum Corps, resplendent in their crisp RAF uniforms. Lydney presented a traditional performance of ‘Long Way to Tipperary’, ‘Great Escape’, ‘Walzing Matilda’ and ‘Highland Cathedral’, interspersed with drum solos, which was complimented by a mace bearer Drum Major that added to the overall effect. The highlight of the show was an excellent cornet solo by 15 year old Rebecca Jessop in Highland Cathedral which brought a very successful first outing to a memorable end.

Parkend Silver Band made their SoundSport debut with an entertaining show entitled ‘A Disney Tribute’, featuring music from Beauty & the Beast, The Lion King, The Jungle Book and Mary Poppins. A well balanced Brass Line produced a quality sound which proved very popular with the audience, who were pleased to welcome Parkend back into competition after a few years absence.

As Thurrock Marching Brass set up for their show, it was clear that we were now in for something completely different. Lavish scenery and props set the scene for a show entitled ‘Under New Management’, inspired by the film Bugsy Malone. Thurrock featured the only colorguard unit and marching percussion section in this evening’s show, which was well integrated into a total ‘Brass Theatre’ style program that was total entertainment. The crowd were left wanting more and many of us wondered if we had just witnessed a blueprint for IMG/SoundSport shows of the future.

Cinderford Academy took to the floor with great applause from their home town fans. Performing a specially written show by conductor Clive Lewis entitled ‘We Sail the Ocean Blue’, the Academy set up looking like they meant business. This nautically themed program featured music from HMS Pinafore, Pirates of the Caribbean and Captain Pugwash. Rod Stewart’s ‘Sailing’ featured a very well performed euphonium solo by 14 year old Louis Thomas who is certainly a player to watch out for in years to come.

Cinderford Town Band performed a concert exhibition with an entertaining program featuring ‘Valero’, ‘Cinderford March’, ‘By the Time I get to Phoenix’, ‘Stop All the Traffic’ and ‘The Angles Sing’. Featuring a quality sound, Cinderford were ably served by soloists Matt Kibble and John Butson who both drew good applause from an appreciative audience.

All the groups reassembled on the arena for the Finale which featured a Massed Band performance followed by the results, which were as follows:

The results were followed by a superb rendition of the SoundSport Anthem ‘Raise Your Voice’ by the massed bands and concluded with the National Anthem. With the success of the Forest Show, preparations are already underway for a second show next year.

The IMG series now moves on to Glasgow for its final show of 2016 on 21st May.