New SoundSport team has a haunted past

Home » News » New SoundSport team has a haunted past

Cutting Edge Corps is a first-year SoundSport team out of Fort Worth, Texas, with an origin story unlike any other group.

The ensemble has had a drum line for 12 years, and until now, had exclusively performed at the Cutting Edge Haunted House in Fort Worth. The venue for the facility, which attracts tens of thousands of people every year, is a 112-year-old building that was formerly a meat packing plant.

The haunted house started in 1990 and is listed in the Guinness Book of World Records as the world’s largest haunted house. Each year, the Cutting Edge Drum Line has marched an ensemble of 23 in the parking lot, entertaining those standing in line. Inside the haunted house is a “Stomp-like” ensemble that entertains and provides a distraction for patrons who have finished one section of the house and are awaiting admission into the next section.

Currently, the all-age Cutting Edge ensemble has about 40 members many who are pulled from area high school and college drum lines. In addition to performing at the haunted house, the drum line, run by Crossmen Drum and Bugle Corps alum Brandon White, plays at games for the NFL’s Dallas Cowboys and NBA’s Dallas Mavericks. 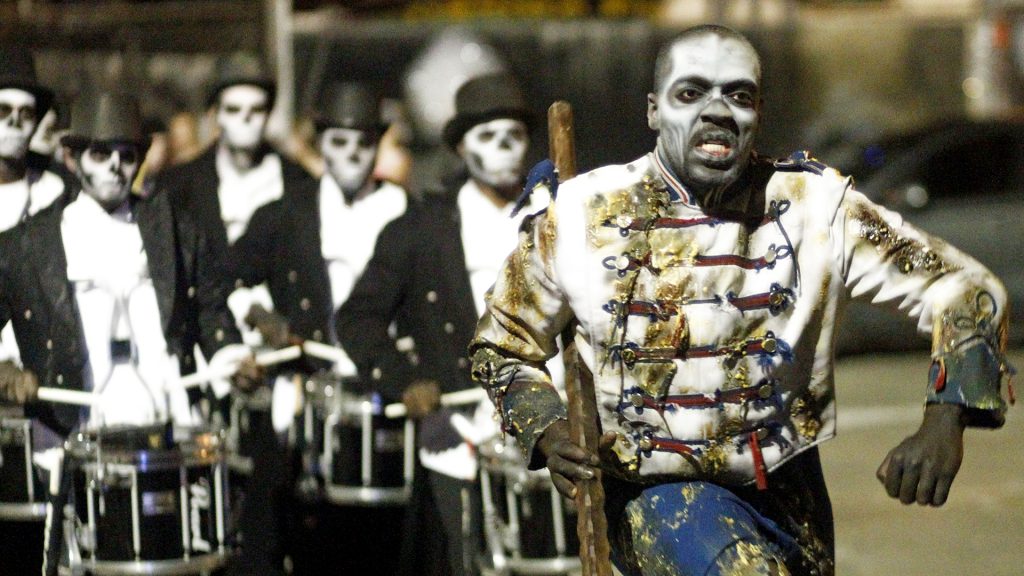 Director Todd James McBrayer brought members of Cutting Edge Corps to the DCI World Championships in 2014, the first year of SoundSport competitions. He and the members were greatly inspired by what they saw of SoundSport, and decided at that time to pursue creating a SoundSport ensemble.

McBrayer, who marched as a member of the Colts Drum and Bugle Corps in 1982 and then spent several years as a percussionist on the amusement park circuit, came to DCI’s annual business meetings in Atlanta this winter to learn how to better manage a team. With plans to add brass and a larger color guard, he says, “SoundSport is a chance to be a part of DCI, an organization the kids highly respect.

“SoundSport allows us to be competitive at a size that makes sense for us. Plus, we can put an extravagant entertainment package together, which is the nature of the haunted house business. I tell prospective members that SoundSport is a ‘small DCI.’ That allows them to relate to something they’ve already seen, letting them better imagine a smaller version of drum corps with no performance restrictions.”

McBrayer claims that having Cutting Edge Corps participate in SoundSport is a steppingstone to having an Open Class corps, but only after years of slow and steady growth. “This is a very slow step. We want to do SoundSport and see where it takes us. Competing in SoundSport will add a competitive atmosphere to what we do, which will help make our group better.”