Rainy weather in downtown Indianapolis didn’t wash away 16 SoundSport teams’ spirit as they gathered inside the Pavilion at Pan-Am to compete for the title of 2016 SoundSport Champion prior to the DCI World Championship Finals on Saturday, August 13.

“In just a short amount of time we have seen SoundSport grow to fulfill the vision we have for it,” said John DeNovi, DCI’s director of business development and a co-founder of the SoundSport program. “We’re seeing groups coming together from all over the country and all around the world with groups of all ages represented as young as five to six years old up to 70s and 80s which is really incredible to see.”

“People coming together playing some music and having a good time and the reaction of the audience here today has exceeded our expectations, so we are really happy with how this year’s event is going,” DeNovi added.

The participating teams also competed for personal excellence while receiving ratings of Gold, Silver, or Bronze from a panel of judges.

Hailing from Omaha, Nebraska the Railmen performed a baseball-themed production, team brass versus team percussion, winning over the judges and receiving a Gold rating, Best in Class honors in the all-age category and Best of Show. 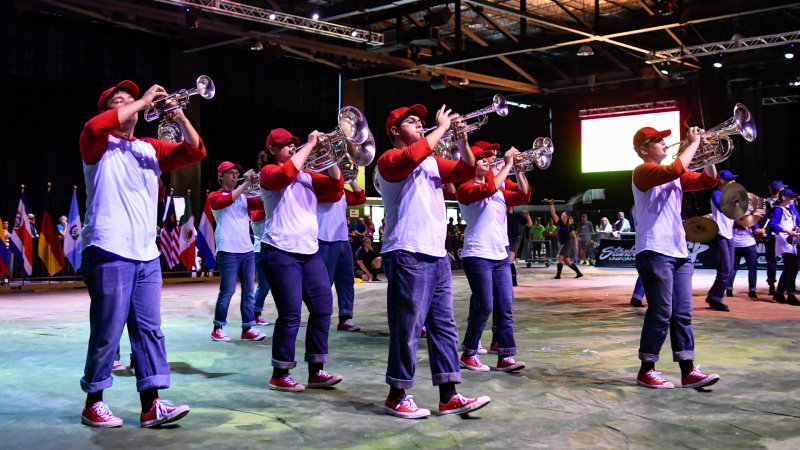 The Railmen perform in The Pavilion at Pan-Am on Saturday, August 13

“It’s amazing,” Railmen member Katrina Andrews said. “I am shaking, I am trembling, I want to scream and I can’t be more proud of this group of kids…I really can’t be. [This has been] so much fun.” 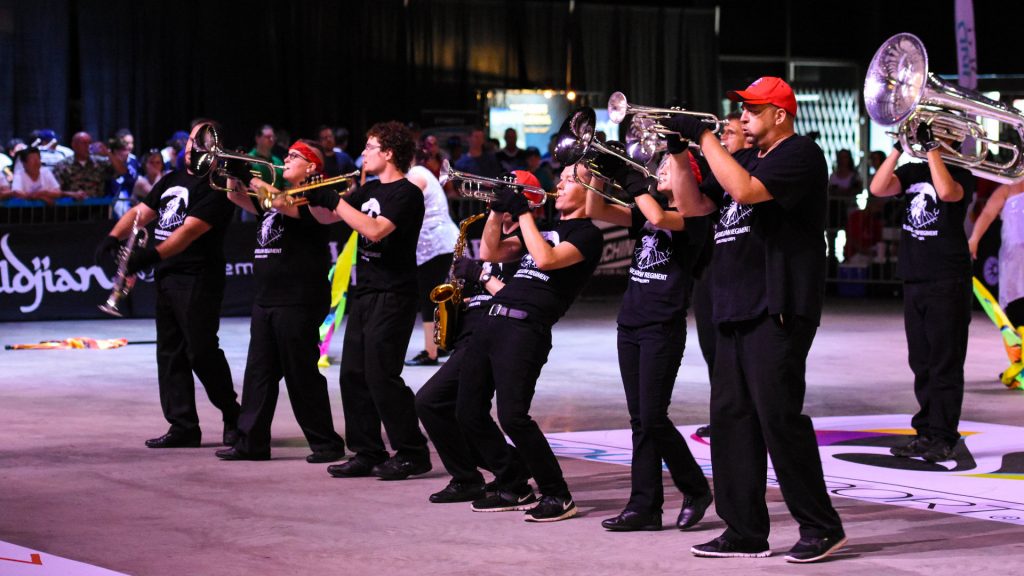 Rouges Hollow Regiment director Eric Bechter said SoundSport has given members of his small-town Ohio group the opportunity to do what they love, entertain a crowd, on their small budget.

“SoundSport is an excellent excellent activity,” Bechter said. “It gives groups like mine the opportunity to go out and put our show in front of people in a competitive atmosphere. Start small, don’t spend a bunch of money and you can still make this happen and that is exactly what we did. We run on a small budget and we’re still here entertaining people and it’s a great venue to do so.”

Two youth SoundSport teams were also in attendance, performing with members all under the age of 22.

The Bishop Dwenger Saints (Gold) from Fort Wayne, Indiana were the first youth team to take the stage followed by the Diplomats (Windsor, Ontario, Canada) who received a Silver rating from the judges.

Also performing on Saturday were members of the INpact Indiana’s Future Band and later the Bridgemen Alumni corps who brought the house down when joined by members of the Jersey Surf Drum and Bugle Corps for an encore presentation.

With the flexibility to stage events in a number of venues and locations, beyond Indianapolis, SoundSport competitions will continue throughout the fall and winter across the country and around the world. Learn more about SoundSport and upcoming scheduled events at SoundSport.com.