The summer season of Drum Corps International’s SoundSport® division took off during the DCI Central Florida event on Saturday, hosted at Southeastern University in Lakeland.

As IMPACT’s first-ever competitive SoundSport event, members aimed to please the crowd with popular, feel-good music. The performance earned the group a silver rating and “Best in Show” honors.

“We try to play things that are familiar,” said IMPACT director Sayre Kulp, who also serves as the group’s drum major, tuba soloist and a percussionist. “Things that you can sing and hum going out of the stadium.”

Kulp said that a good portion of what audience members hear his team perform on the field comes from ideas generated by its members. “Almost everything we’ve ever played in this corps comes from somebody saying, ‘You know what we should play…’”

The team’s performance featured several small groups and soloists, including a tuba solo which was originally written for a baritone saxophone.

“I think we did really well,” Kulp said after performing. “We had a couple of little hiccups here and there, but mostly nervous jitters for the first show out and in front of a crowd like this, but I think all together everything was pretty solid top to bottom.” 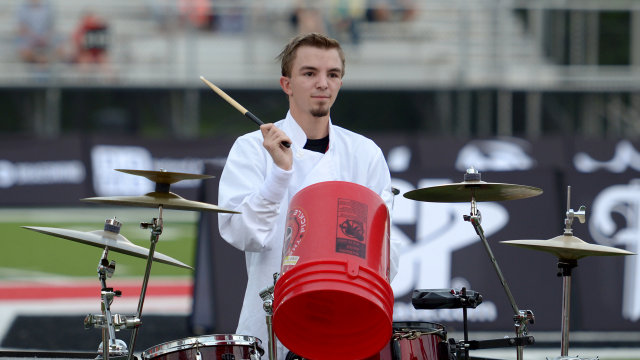 A Florida Xpress percussionist lays down a bucket drum beat.

Florida Xpress earned a bronze rating with its performance that featured a bucket drum solo. It’s an idea that came from a member after a trip to a Firehouse Subs restaurant.

“I was at Firehouse Subs one day and saw they had pickle buckets, and I asked if I could grab one,” Florida Xpress percussionist Justin Morin said. “So I looked at one of my old drum sets and pulled off the mount for it and went ahead and drilled some holes, put the bucket in, and it worked like a charm.”

The team is continuing its creative theme by building a vibraphone out of pots and pans. Morin said that members go to hardware and Goodwill stores in search of cookware with the perfect pitch.

“My personal goal is just to have fun with this,” Morin said. “I mean it’s a really fun show. It’s a great concept, and that is really the whole goal of SoundSport—Go out there, play some music and have fun. If we can interact with the crowd and get the crowd going, that’s my goal for the season.”